We had planned on relaxing at home today. Instead, we got an offer we couldn't refuse. Robert and Roland's uncle Lasse has a wonderful cabin on the river just northeast of Haparanda, in the woods in Finland. We were invited to come and sauna, which is most definitely a verb in Finland.  The weather report initially said "a bit of snow" but when I woke up this morning it was blowing sideways, drifting into small snow hillocks everywhere. 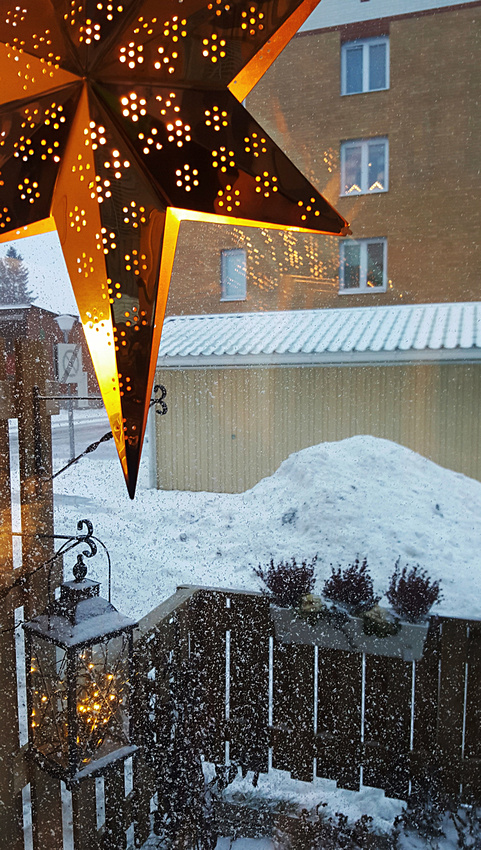 a bit of snow

I woke up to the smell of meatballs cooking: another way to tell it's Christmas. Roland was working hard in the kitchen. 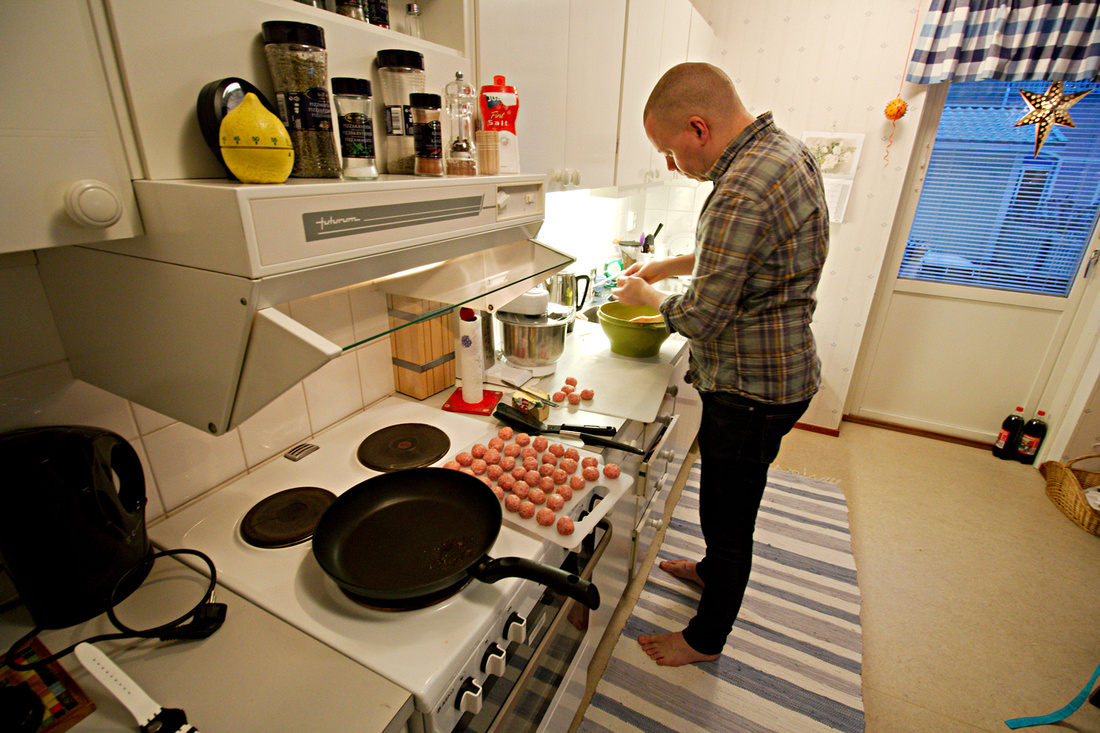 ​We had a late breakfast, then, just as we were about to start icing our gingerbread house, we got the call to go to Finland. I had never been in a wood-fire sauna before, and we were all really excited to go now that the weather had turned snowy. GPS got us a bit lost on the way, and we found ourselves on some very snowy and deserted back roads in the middle of nowhere, Finland. A quick call to Lasse, some doubling back, and he met us to guide us to his cabin. I don't know what I expected, but it was more beautiful than I could imagine. It's their summer house, set on the river, with the sauna house, a small kitchen house, their old summer house and a new one. Of course everything is that lovely red and with the sun gone and the snow, it was absolutely glowing. 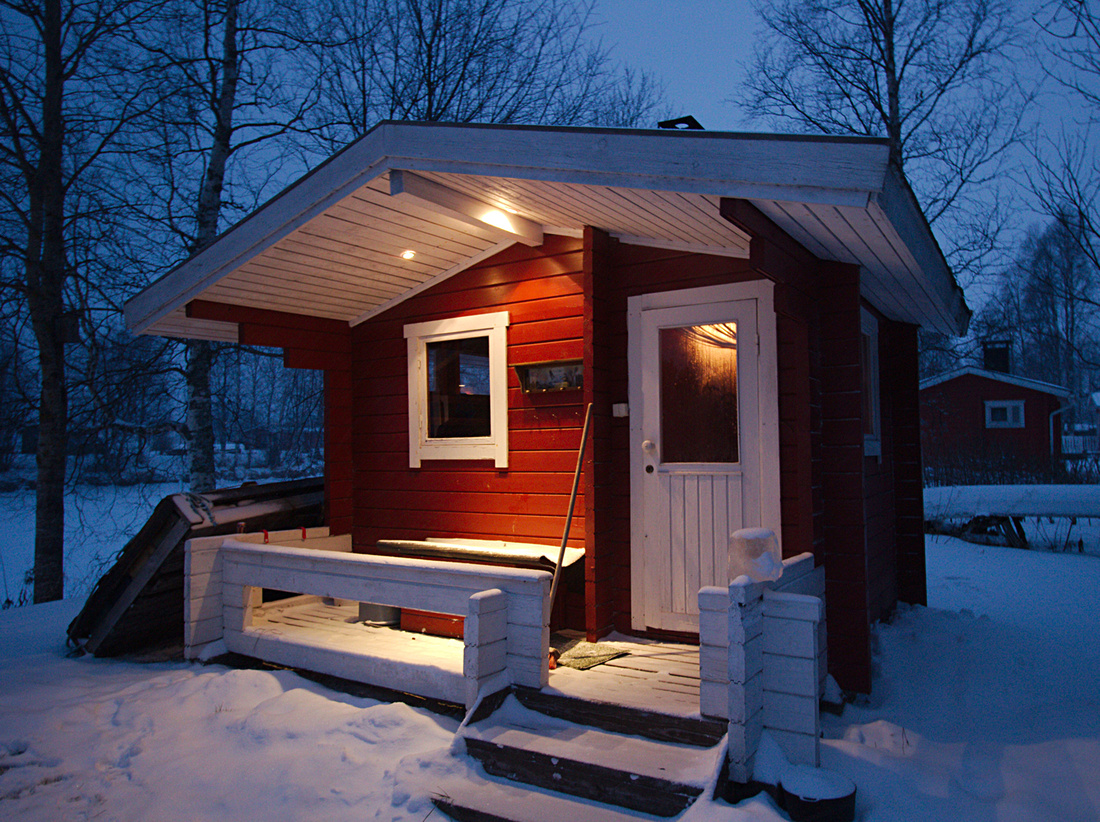 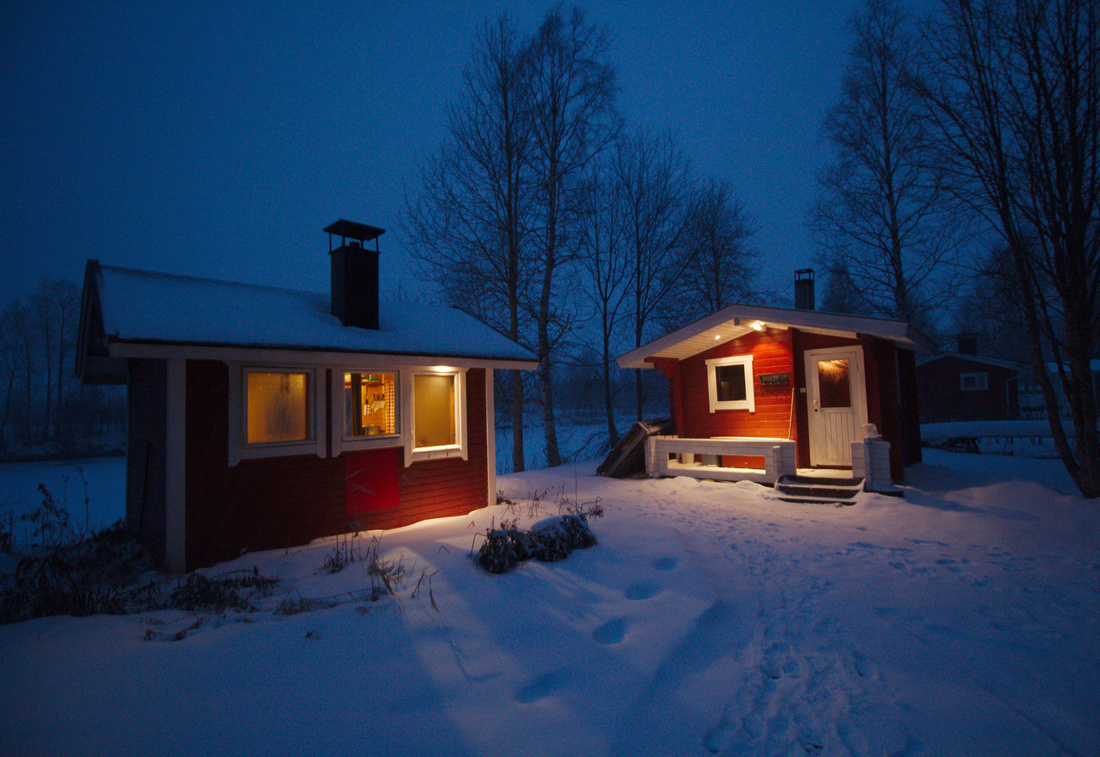 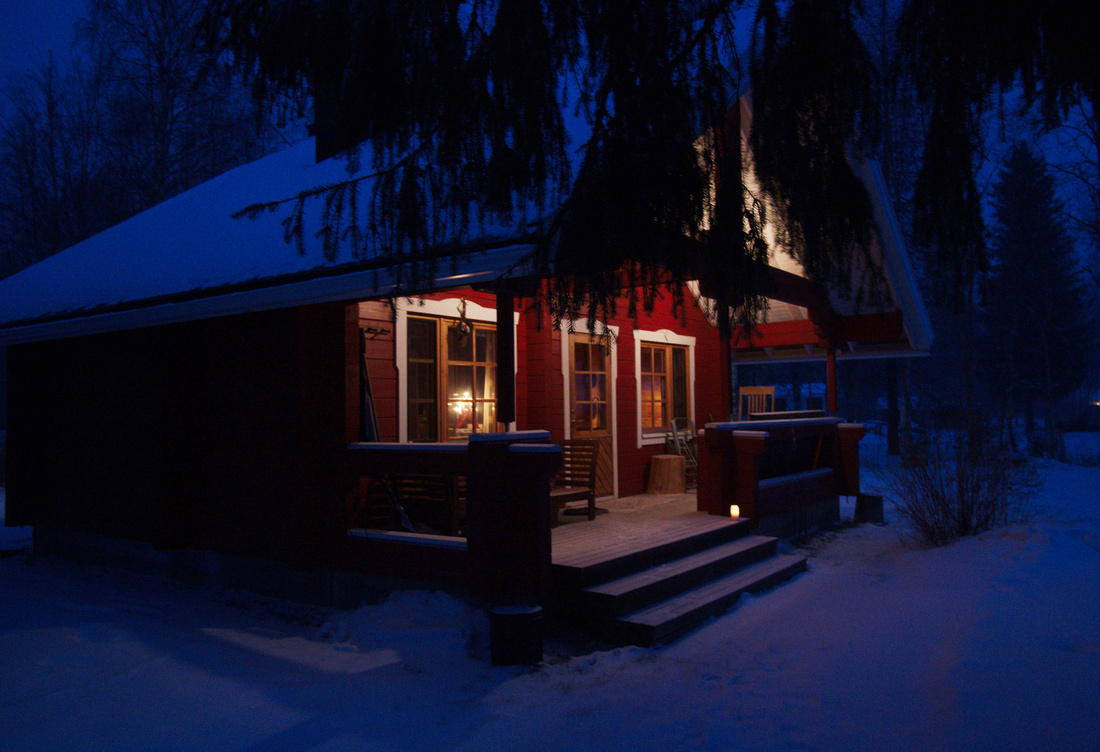 I have long suspected that Lasse and Vuokko (pronounced roughly "whoahh-ka") are actually Santa and Mrs. Claus. This visit to their cabin did nothing to dispel that suspicion; rather, it confirmed it. They had a small fika ready for us in the kitchen house. Sydney's face says it all. 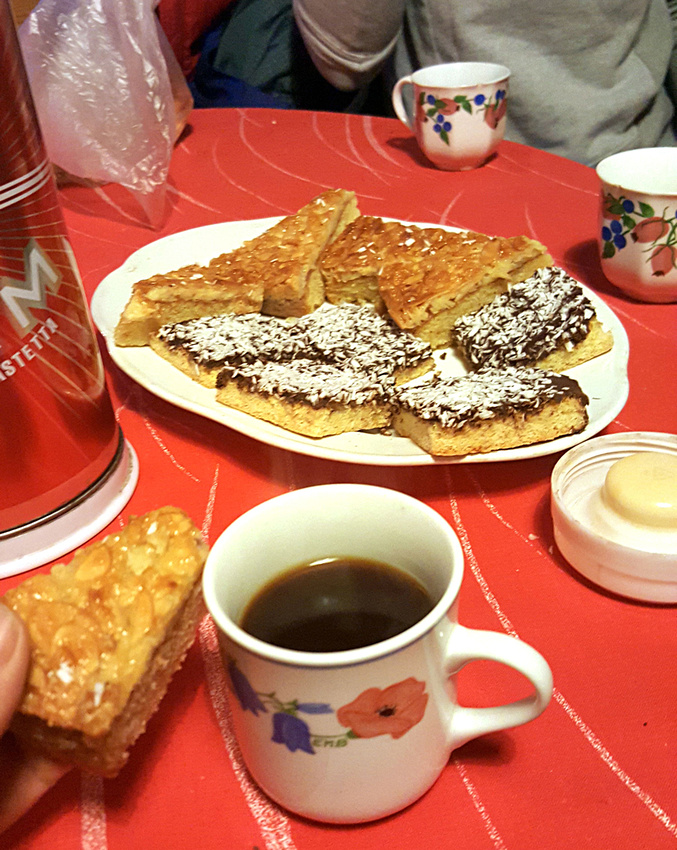 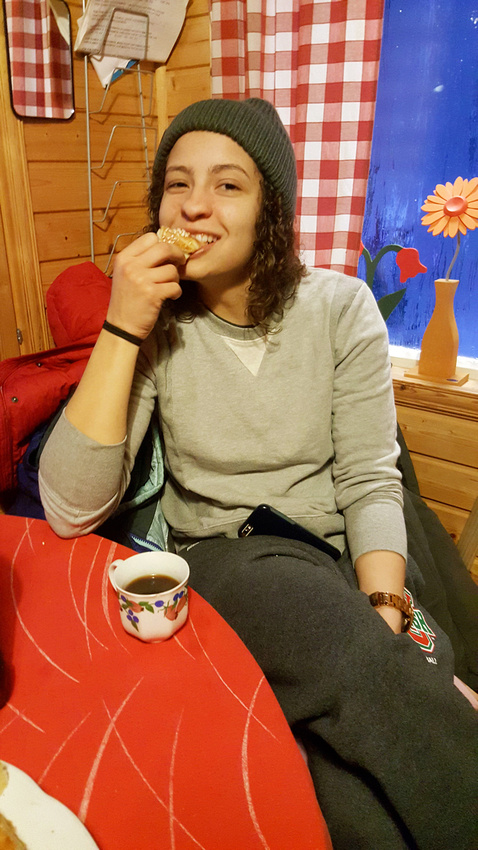 Robert has explained to me many times the proper sauna: go in, splash hot water on the coals to heat the room even more. 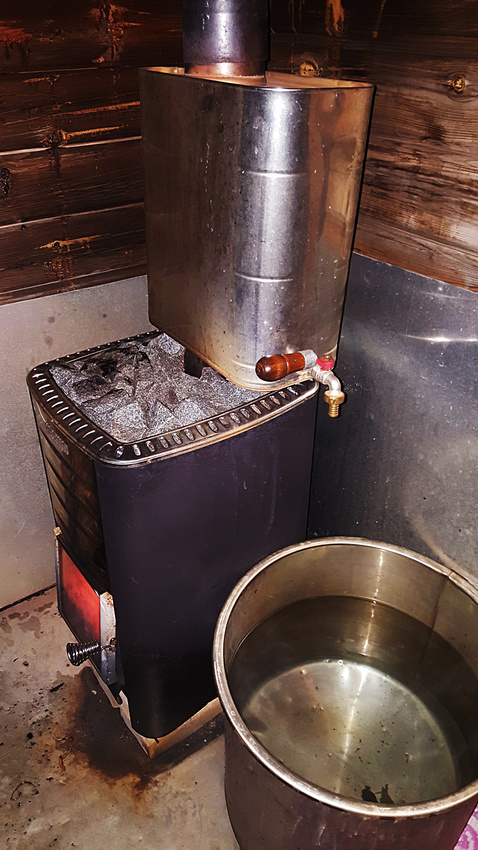 Then there is a birch branch with leaves on it sitting in a pot of water. 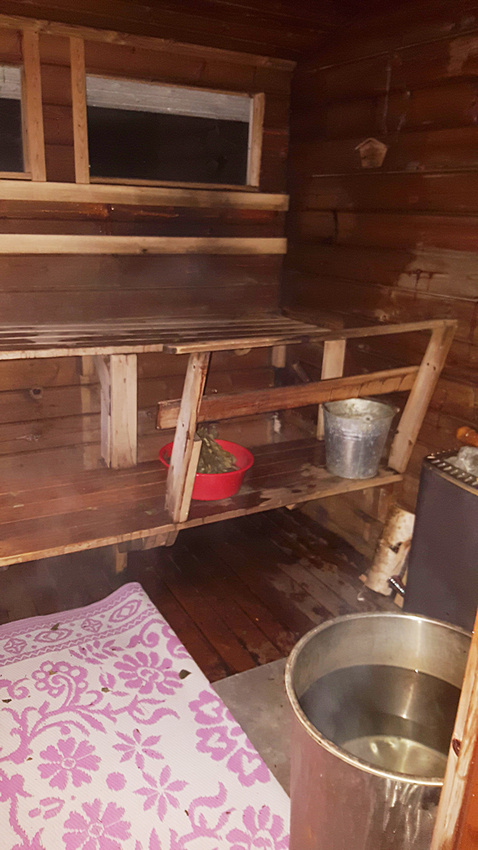 Inside the sauna: the bench, the pot of water, the bucket with birch branches.

You take this big wet branch and sort of, well, flog yourself with it all over. The idea behind this was explained to me quite vaguely as "it makes you feel good" and also that it gets rid of toxins. Then, when you cannot stand the heat any longer, you go out into the snow and roll around (or jump into the cold river if it's summer). Then you go back into the sauna some more. The boys went first and looked to have had a wonderful time. I can confirm that there was rolling in the snow. 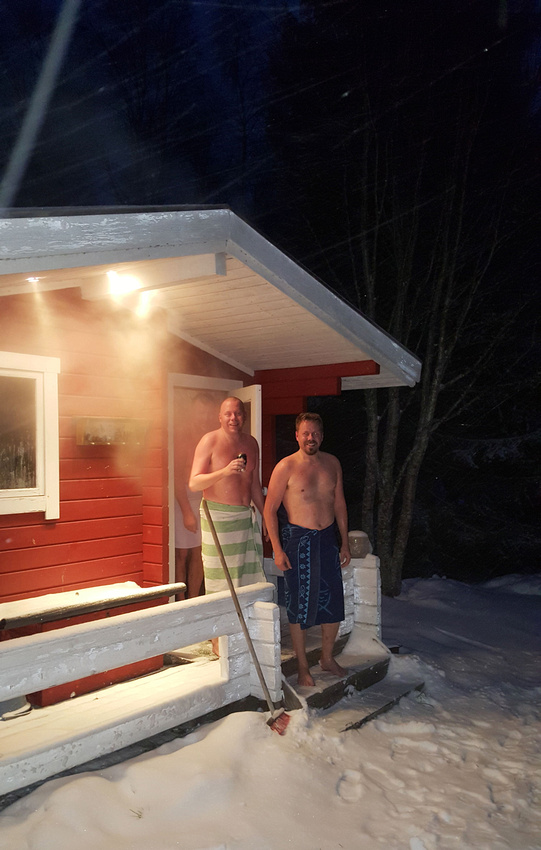 Not feeling the cold one bit

This was Sydney and me before the sauna. Kind of tired, kind of nervous, kind of cold. 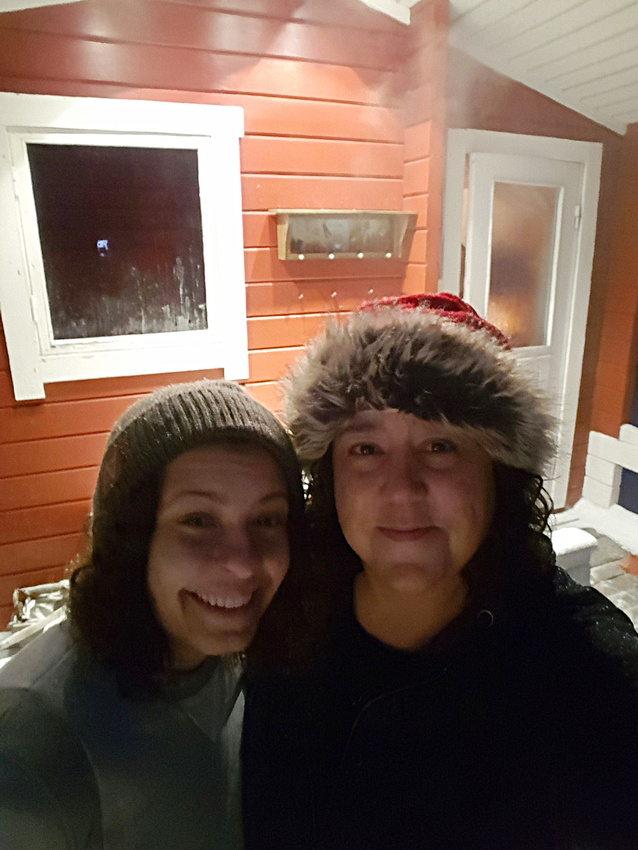 When it was our turn, we joined Vuokko up on the top bench and she splashed water into the heater and showed us how to use the birch branch. It smelled wonderful--like some forest-scented tea, infused through everything by the steam--and I was encouraged that it wouldn't hurt too much by how hard Vuokko hit herself with it. Sydney and I took turns hitting ourselves with the branch; it did not hurt. After the cold last night, it felt amazing to be warm all the way down to our bones. Finally, when we couldn't take it anymore we fled out into the snow and rolled around in it as instructed. I can confirm that it was absolutely refreshing and not cold at all on my bare skin. It was a singular experience, and going back into the sauna after the first round, I felt about 25% more alive. This time I let Sydney sit next to Vuokko so she could get closer to the birch branch bucket. We were already laughing when we came in from the snow, and when Vuokko saw Sydney not hitting herself hard enough, she took the branch into her own hands. I nearly wet myself laughing watching this tiny naked Finnish woman beat the shit out of my niece in the sauna. I love Vuokko. This is us after sauna. Very happy. Beaten half to death. standing outside in the cold barefoot. 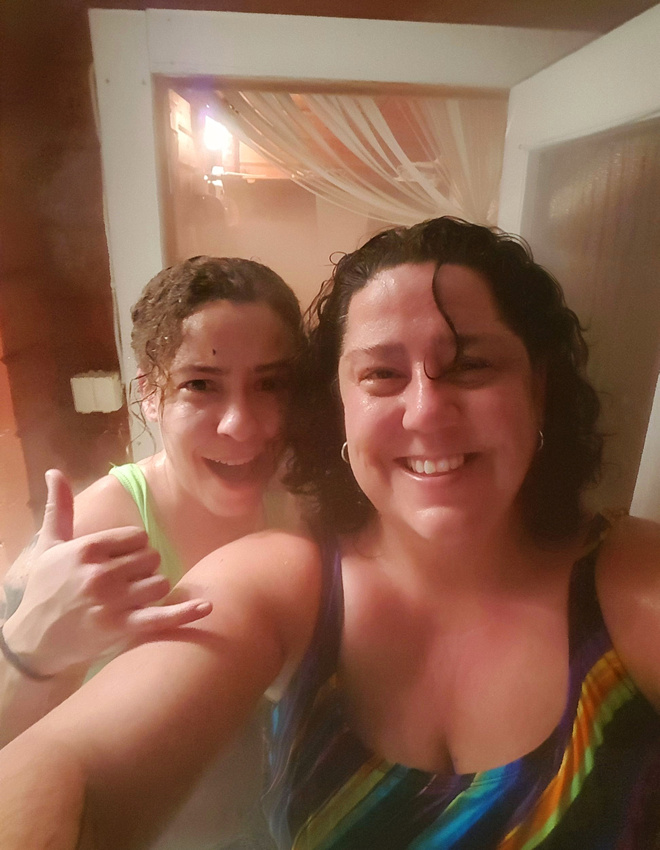 We stayed in the snow barefoot for awhile, cooling down. I let the snow fall on me for a good five minutes before I went to get dressed. Vuokko came strolling up ten minutes or more later, still barefoot. When I pointed at her feet, she just laughed, "it feels good!" This is the Scandinavian version of walking on coals. We headed into the main house for a quick nip of some schnapps before heading back home for Christmas dinner. 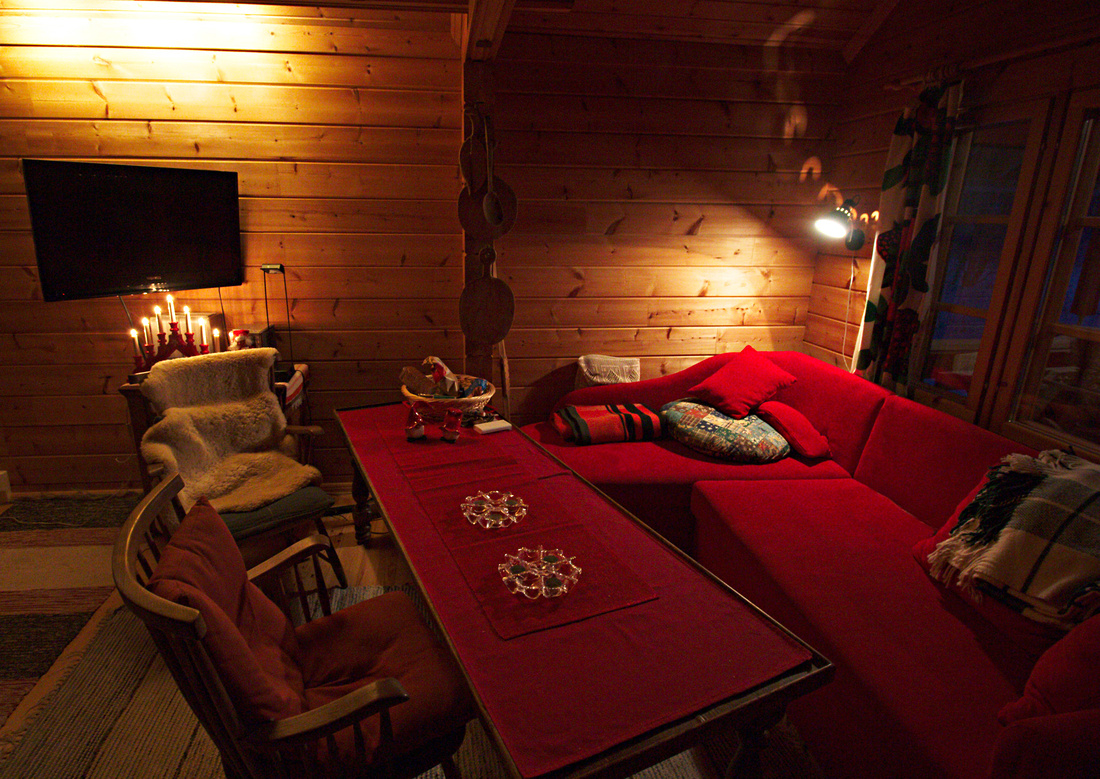 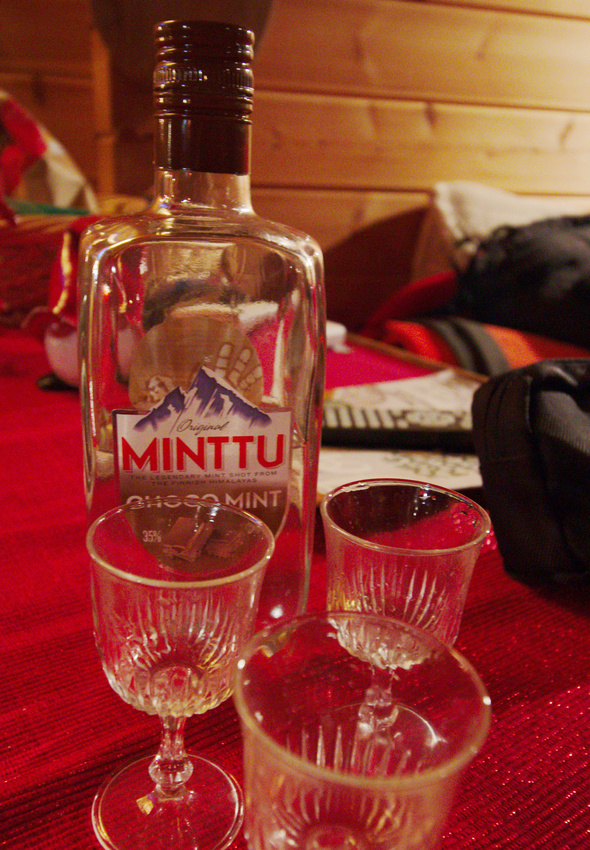 The roads were very, very bad on the way home, and Lasse had to dig the car out with a shovel when we got stuck in the driveway. Maybe next time, we get a four-wheel-drive.

Back home, everyone put together julbord, Christmas dinner. I was too hungry to take pics of everything (hitting yourself with a wet branch works up a hella appetite) but here is my plate, with ham (julskinka), prinskorv (little sausages), gravad (like lox), meatballs, beets, tomato and cucumber, Janssons frestelse (potato and anchovy casserole), mimosa salad (fruit/mayo salad) potatoes, and my favorite soft round Swedish bread called Rågkaka, with my favorite Swedish gouda. 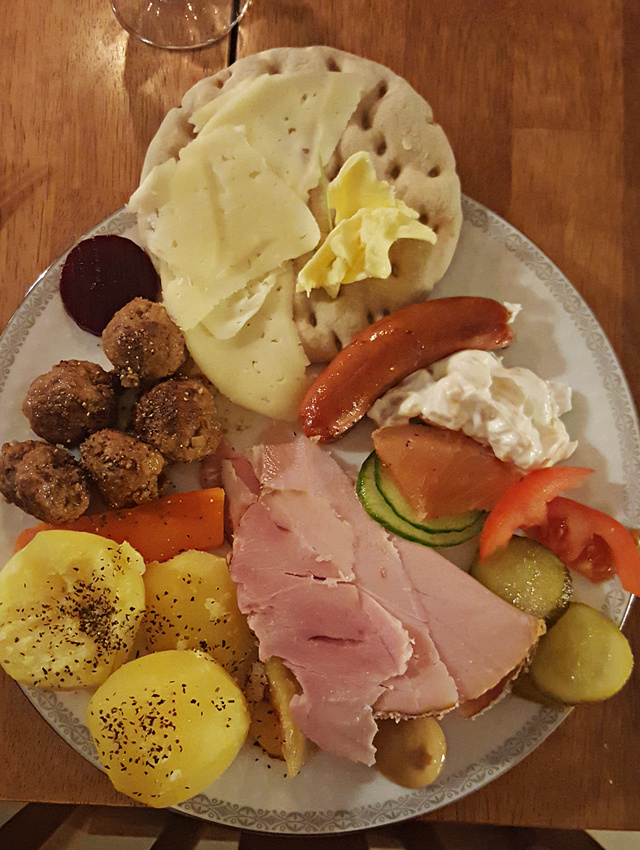 Over dinner, Robert asked Sydney what her favorite part of the vacation has been so far. She answered that while seeing the aurora was overwhelming and everything has been wonderful, that just being around his family and everyone being so kind and warm and welcoming has been the best part. I love this girl! It was a great answer, and I let the happy silence fall for a moment before I announced that my favorite part, hands down, was watching Sydney get beaten by a tiny naked Finnish woman in the sauna. Merry Christmas!

Jimmy(non-registered)
So I can't be entirely sure, since I was a child at the time, and the adults won't tell, but I am rather certain that Lasse was usually the Santa when me and my cousins were young!
No comments posted.
Loading...
Subscribe
RSS
Recent Posts
the end of the holiday Frost and fika Haparanda favorites FINALLY, WAFFLES Family time! Stockholm! Grand Canyon Leigh Jones Gingerbreads go to the beach December Muse: Gingerbread
Keywords
Sweden Christmas Haparanda snow sunset fika Stockholm winter Finland forest
Archive
January February March April May June July August September October November December
© Candy Caldwell
Powered by ZENFOLIO User Agreement
Cancel
Continue