It's been cold and raining/snowing since we arrived in Helsinki, so I haven't seen much of the city yet. The hotel where I'm staying is smack in the middle of everything, though, so with a better forecast for tomorrow, I've got plenty on my list to see. In the meantime, here's a short recap of my first couple days.

Saturday was a blur of jet lag nursed by a long nap, followed by beer and great pizza. We stopped at a spot around the corner from the hotel and found a midnight supper of kebab pizza--different from Sweden's, but still delicious with surprisingly hot jalapenos. 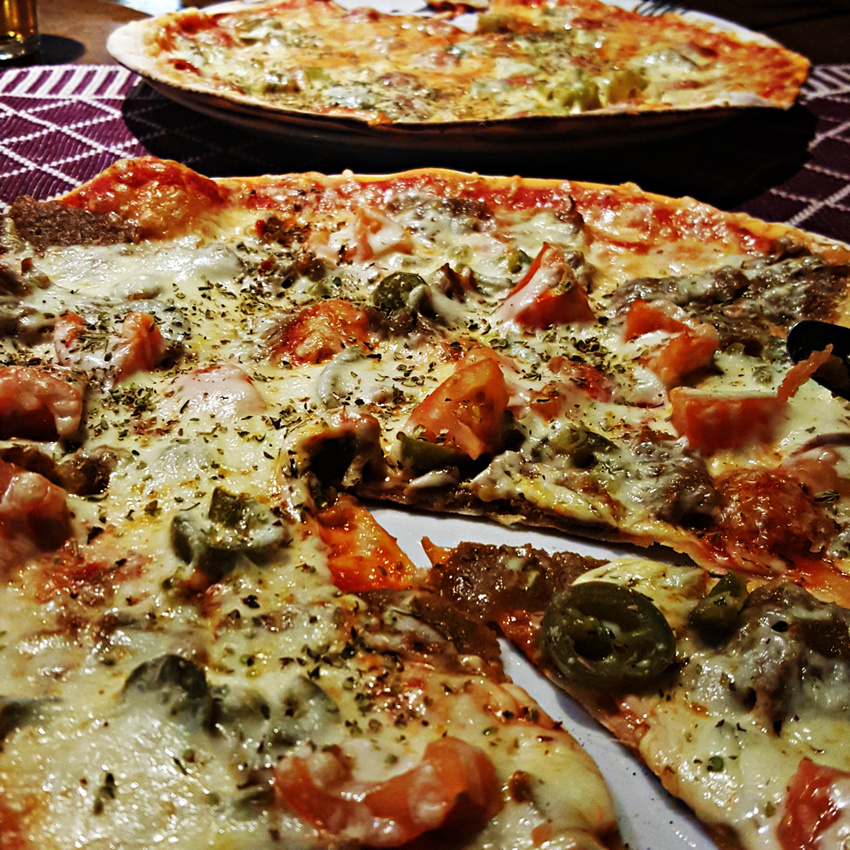 After, we headed to a fantastic little bar Robert had been to once before called Liberty or Death. (A friend commented that the name is a little on the nose, given the current state of affairs back home. Having been glued to the news in the wee hours from anxiety and jet lag-fueled sleeplessness, I have to agree.) The bar was perfect: dark and cozy with exceptional service. I had a Bulleit cocktail with Luxardo, Vermouth, lemon, ginger and pineapple and it was delightful. Also, just the trick to get me back to sleep. 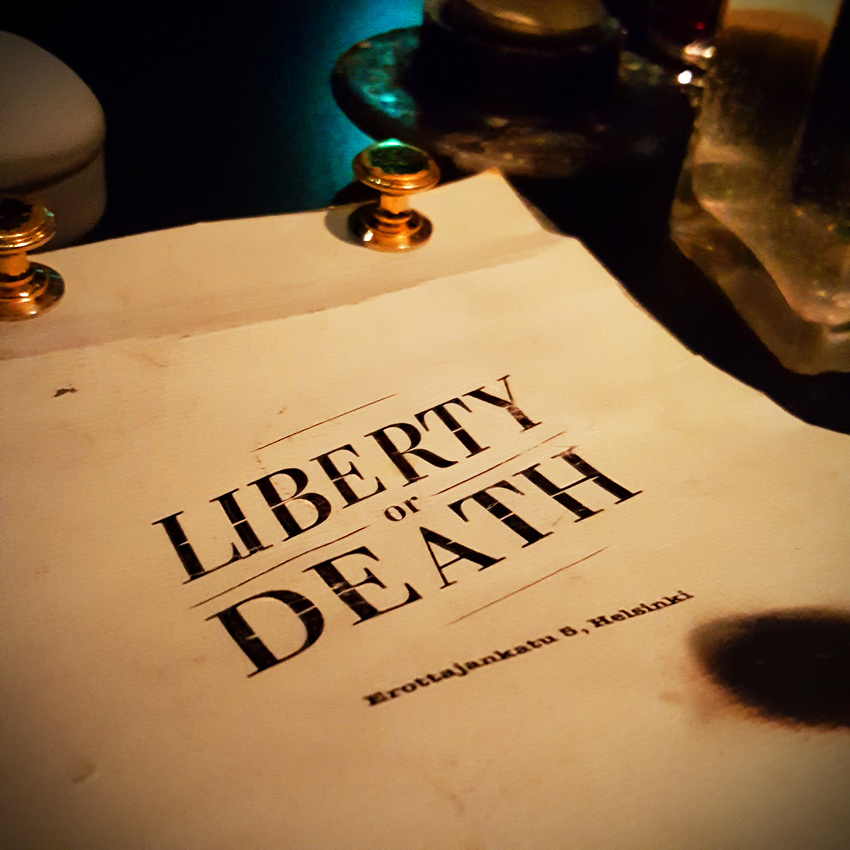 Sunday was rainy and cold but we ventured out anyway, starving and with a general craving for cheese and wine. A quick walk downtown took us to a cute chain pasta place where they make pasta to order. It's a bit cumbersome to order but was absolutely delicious. 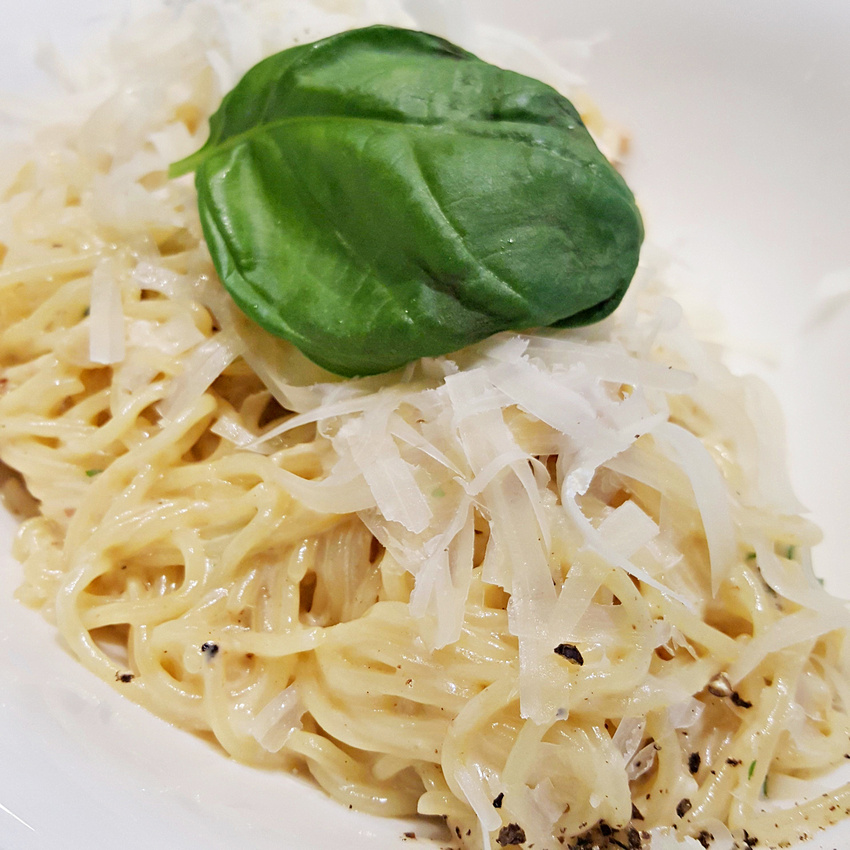 The first thing I noticed on the ten minute walk to lunch is the architecture here. These buildings are SO gorgeous and interesting, and I await a sunny (will settle for not raining) day to get some nice photos. For now, here is the Helsinki University Library building. So cool. 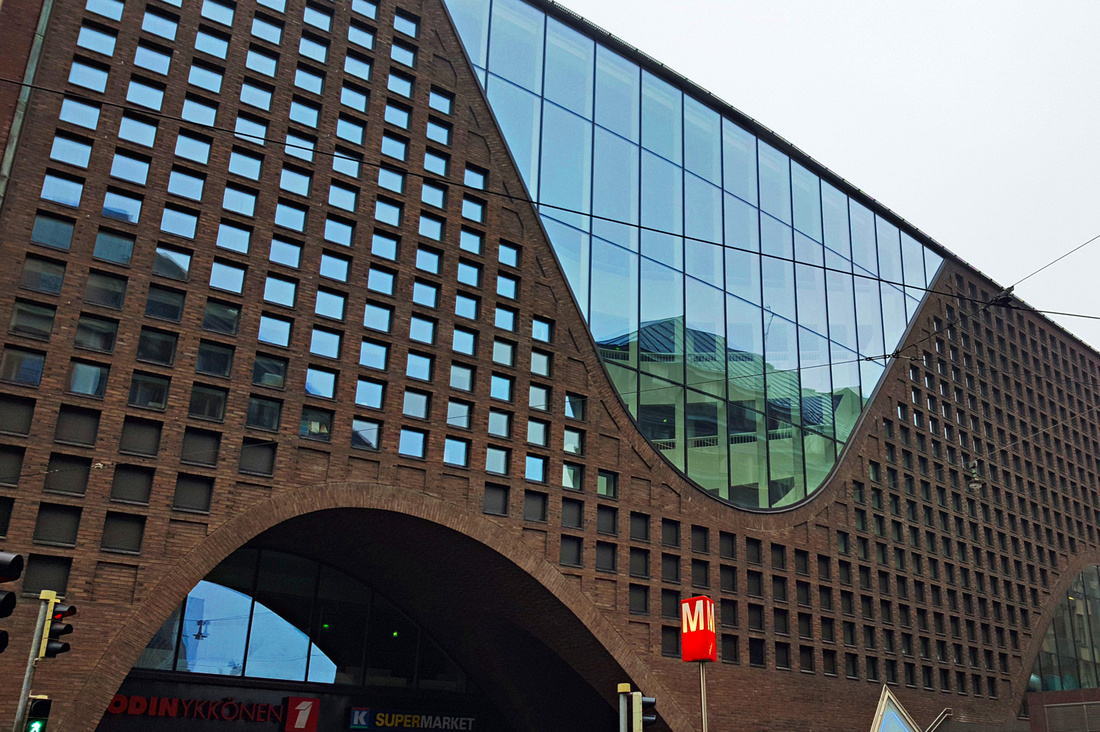 We hopped in a taxi over to the Temppeliaukio Church, aka the Rock Church, so called because it was carved into a rock. Inside are copper details with stunning rainbow patina, a pipe organ, and so much light--even on a cloudy day--from the ring of vertical windows in the massive domed roof. 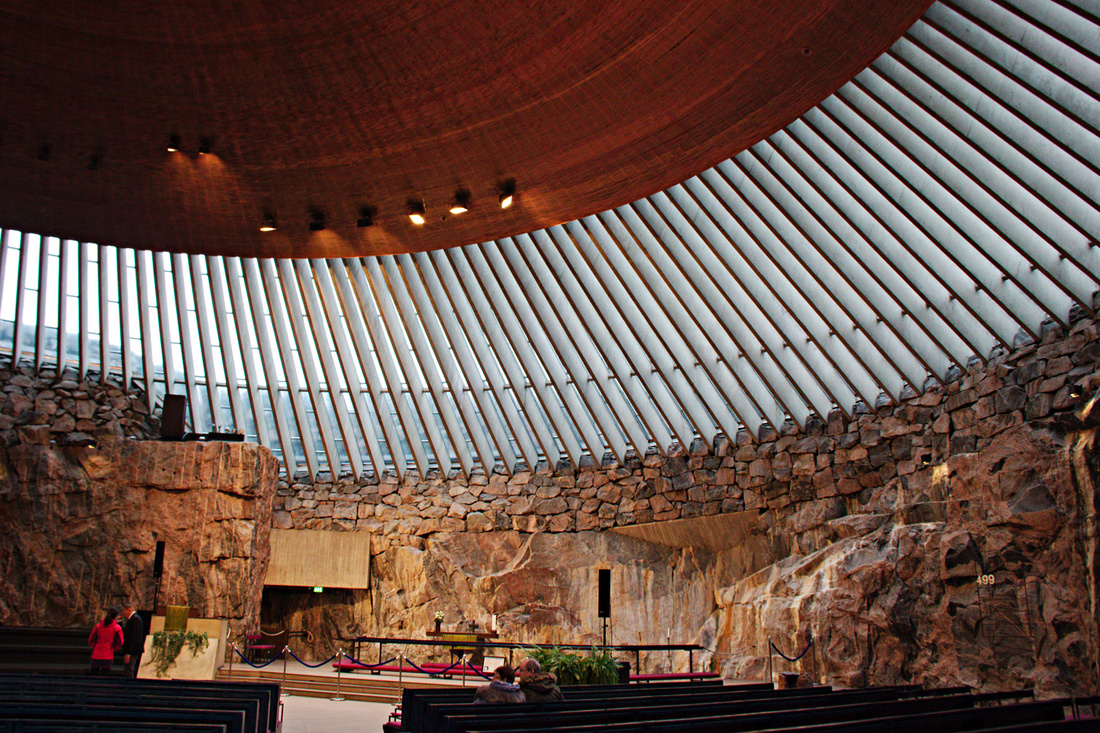 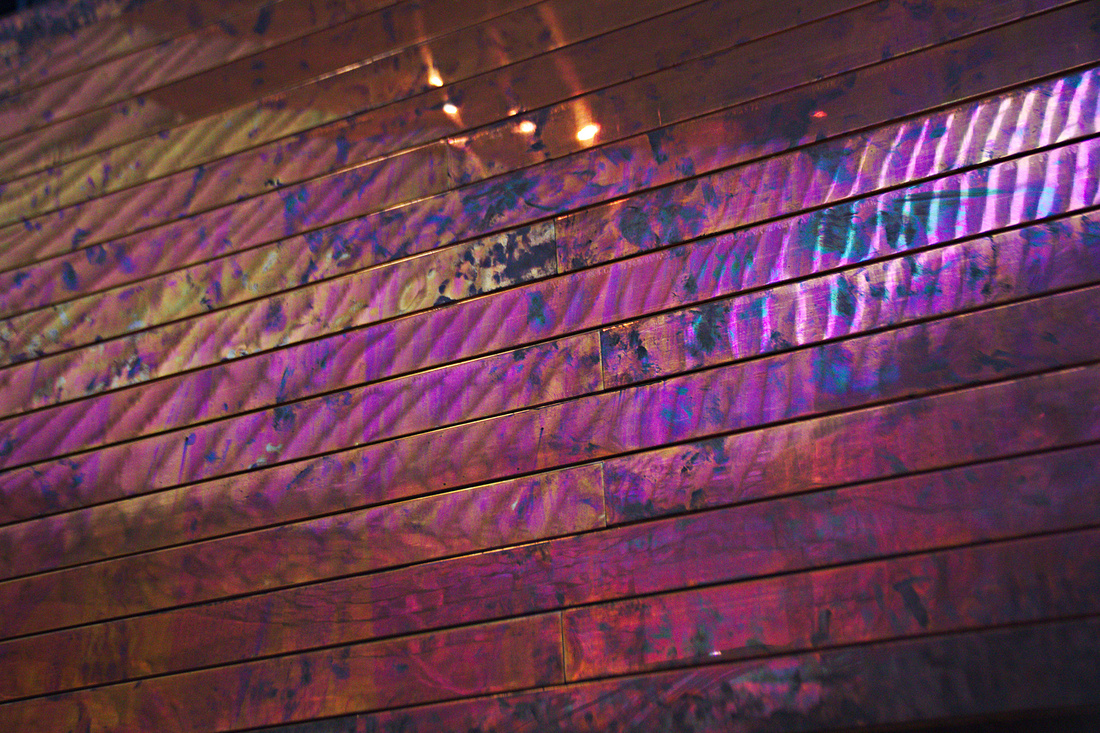 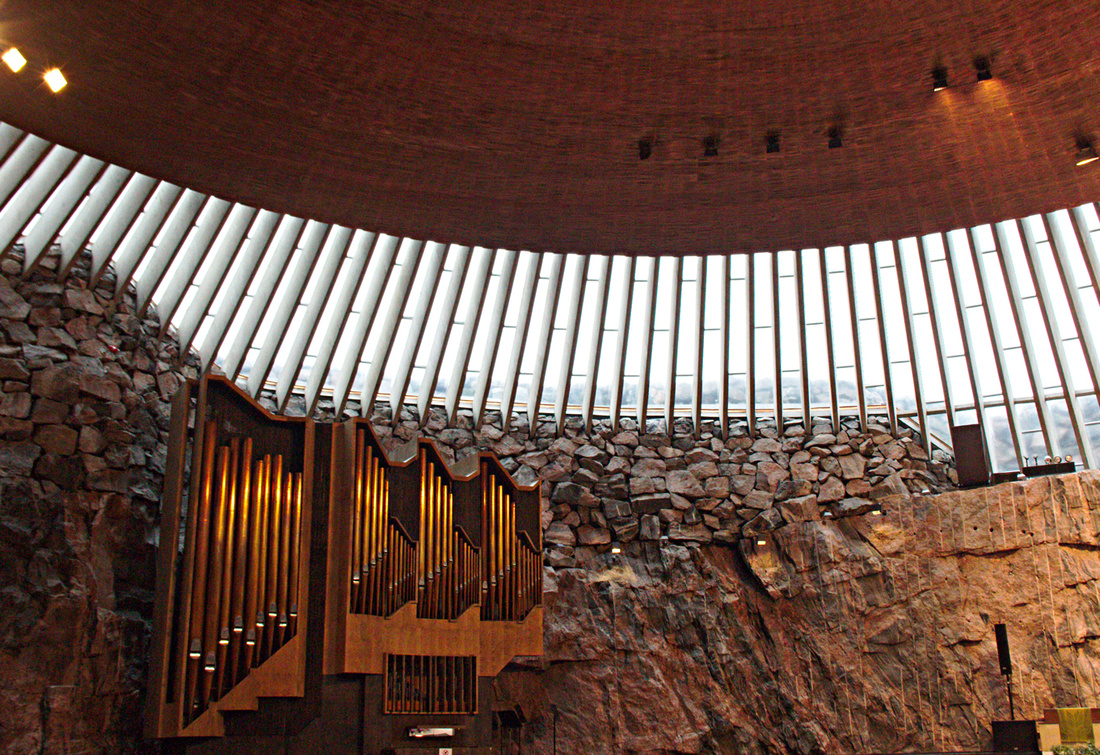 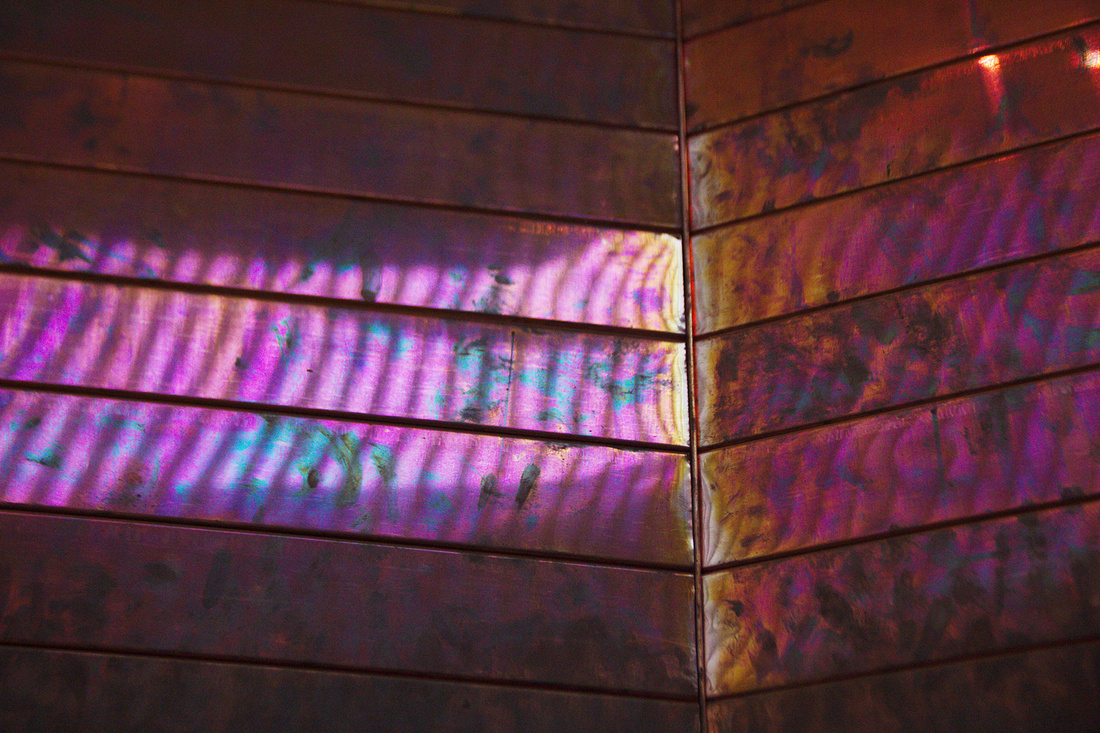 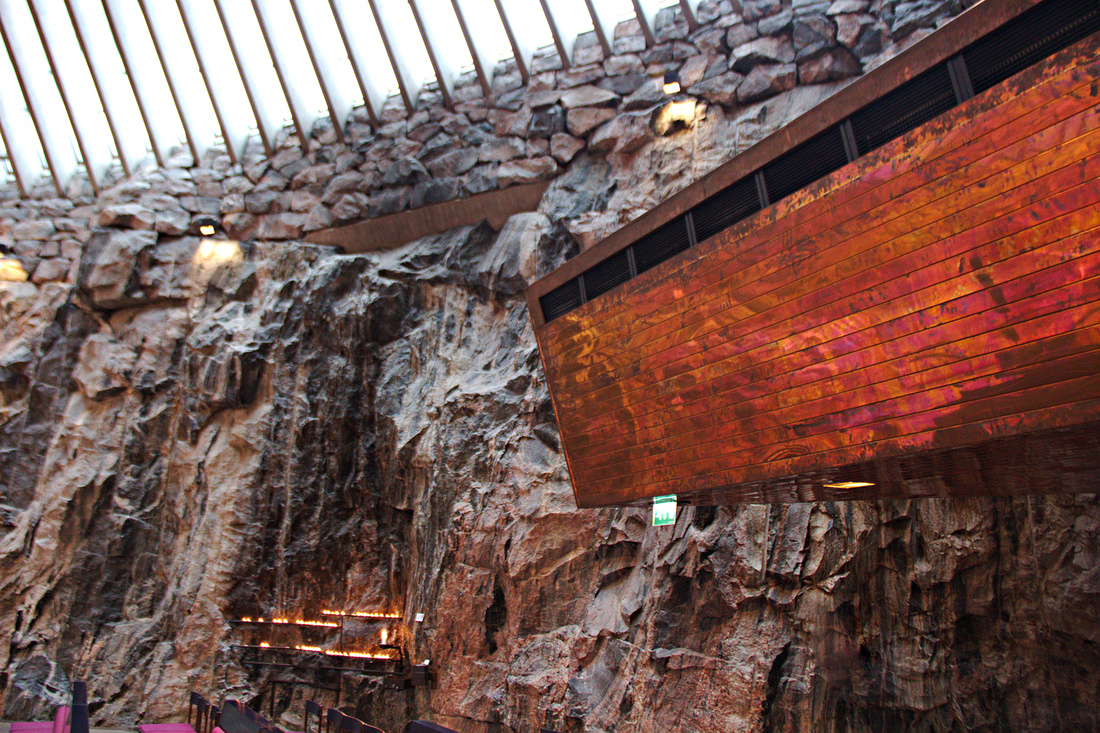 We knew we'd fall asleep if we went back to the hotel, so we walked a few blocks to the National Museum. On the way we passed a park with these huge trees growing the brightest moss I've seen since living in Iceland. The North does snow and the North does green. Hulk tree smash! 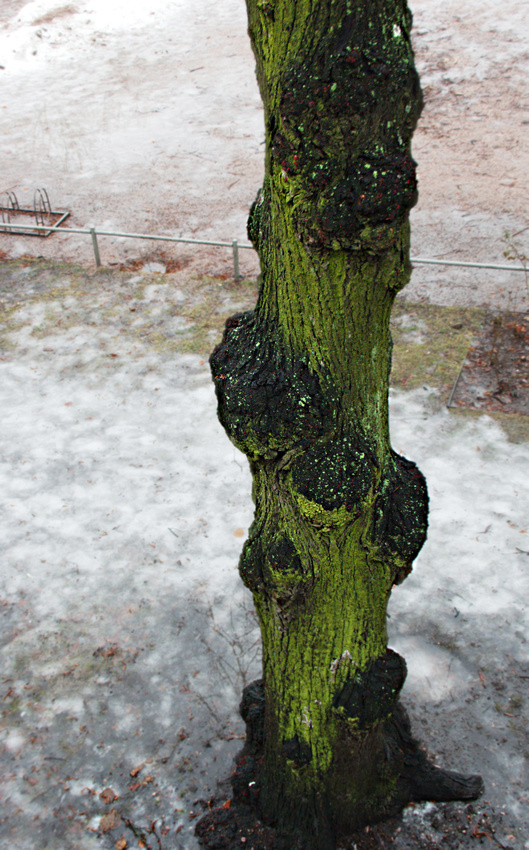 We weren't sure what to expect from the National Museum but it was full of artifacts and treasures dating back through Finland's complicated history, having been part of Russia and Sweden before gaining independence 100 years ago.

The dome in the main entrance. 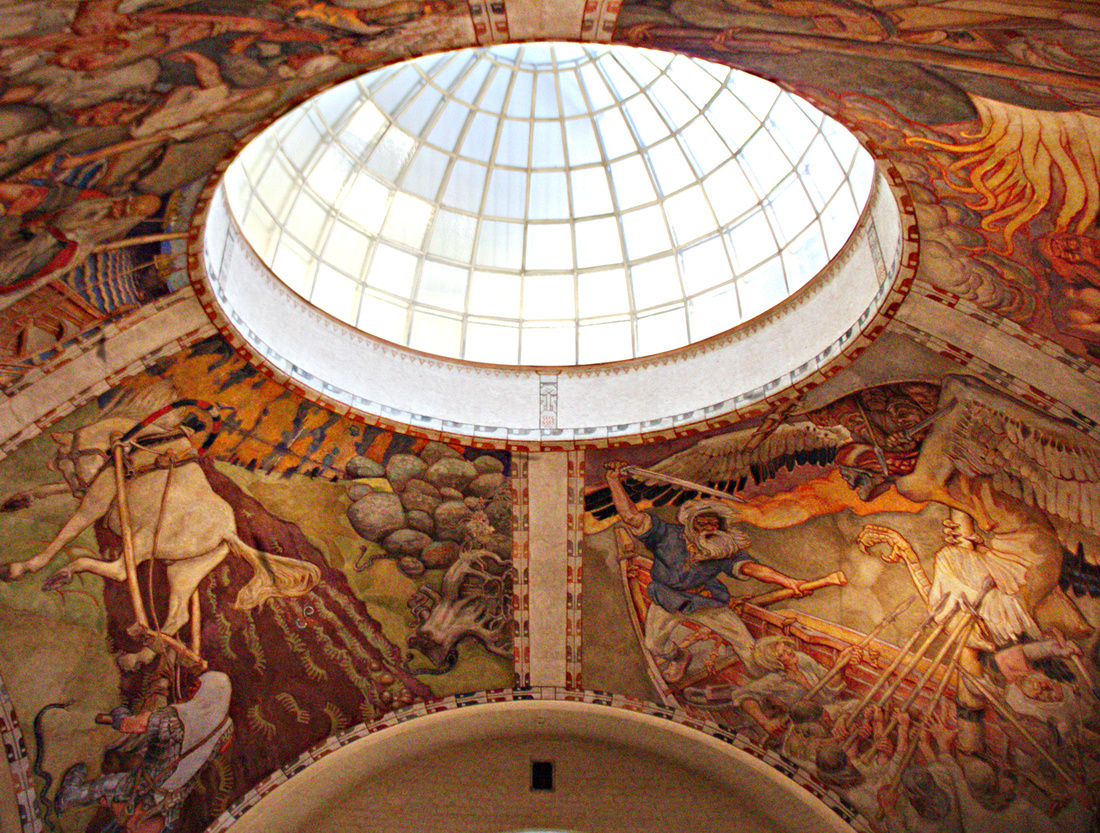 Coming from a place with a comparatively short history, it was staggering to research Finland's history and find that it started in 9,000 BC. The most interesting parts of the museum, for me, were about the indigenous people, the Sami, whose ancestors were those Mesolithic Era people.

I only snapped a few photos here, as I spent most of the time finding the English versions of the text for everything. I did grab this: a photo of a perpetual motion machine. Of course, it didn't work, but the creator, Mikko Mikonpoika Minkkinen, spent his life making it. 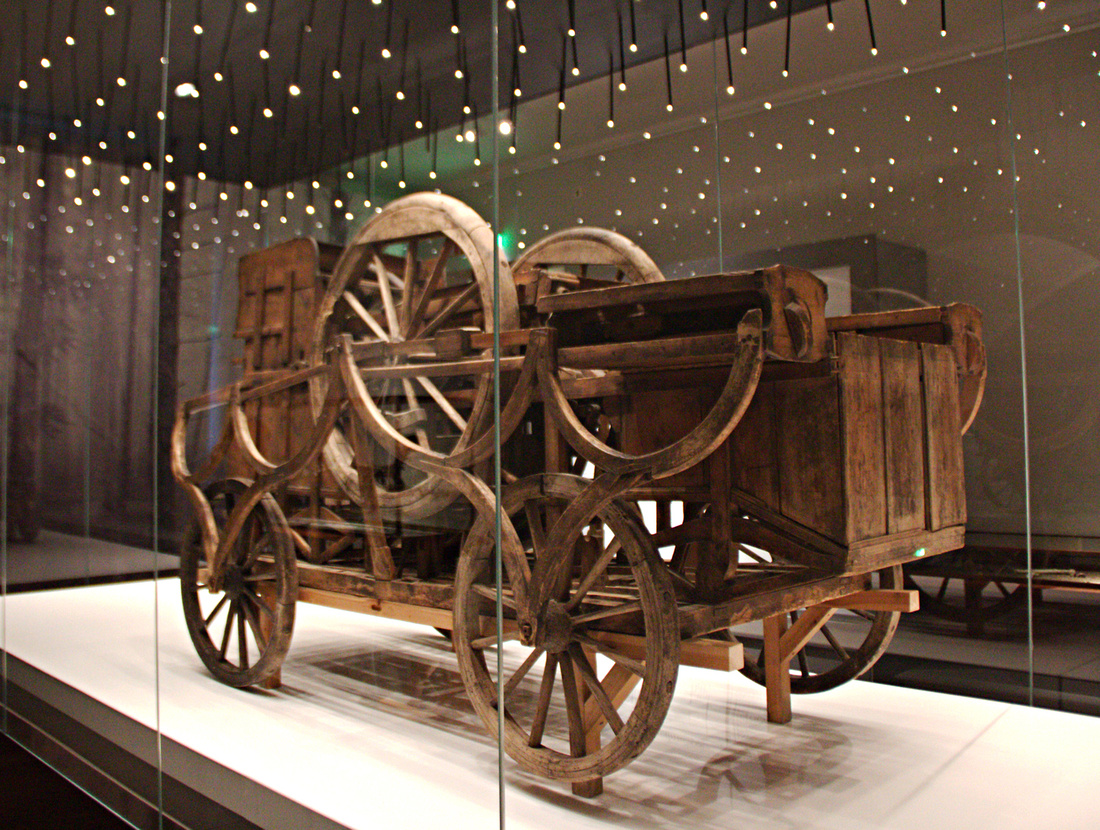 There were a few rooms decorated like some of the richest homes would have been, and in them the walls and ceilings were painted beautifully and decorated with these amazing clocks. 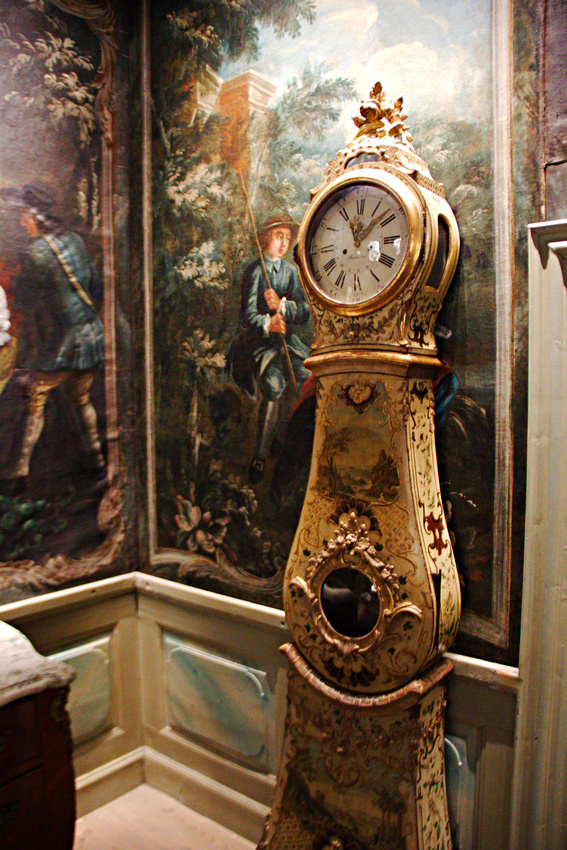 In another room was the best clock I've ever seen. This clock is me. 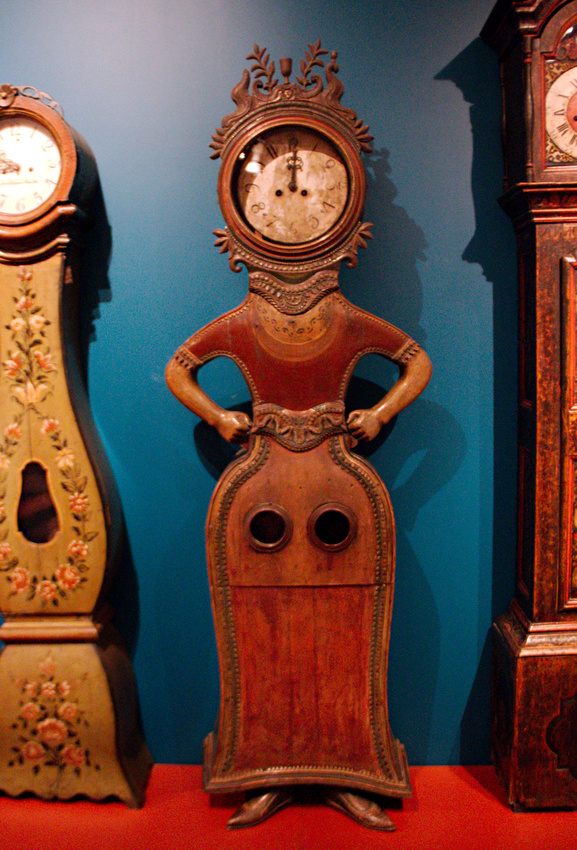 If I was a clock

This lovely stained glass in the halls made even the cloudy day seem cheerful. 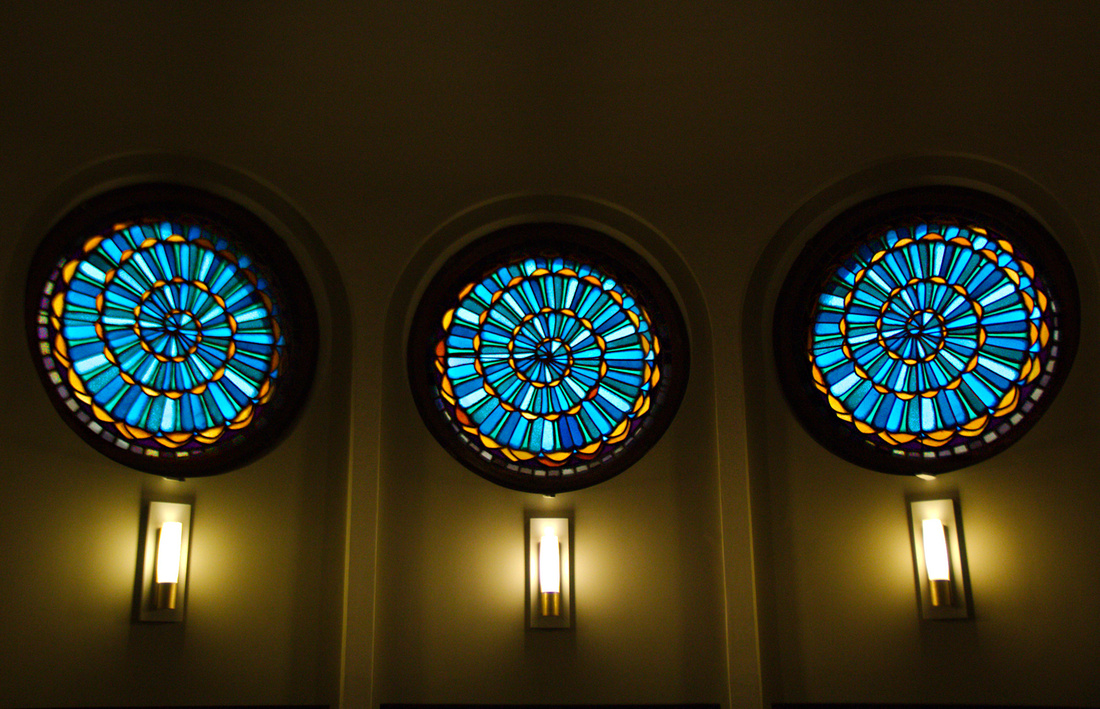 Stained glass at the National Museum

After the museum, we walked out into full-on face-freezing rain. We braved it, and passed a lovely post office on the way home. 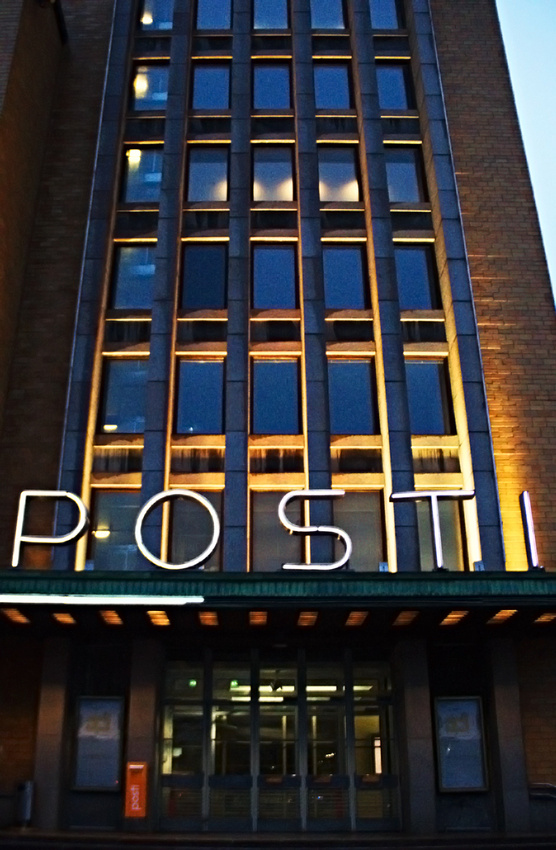 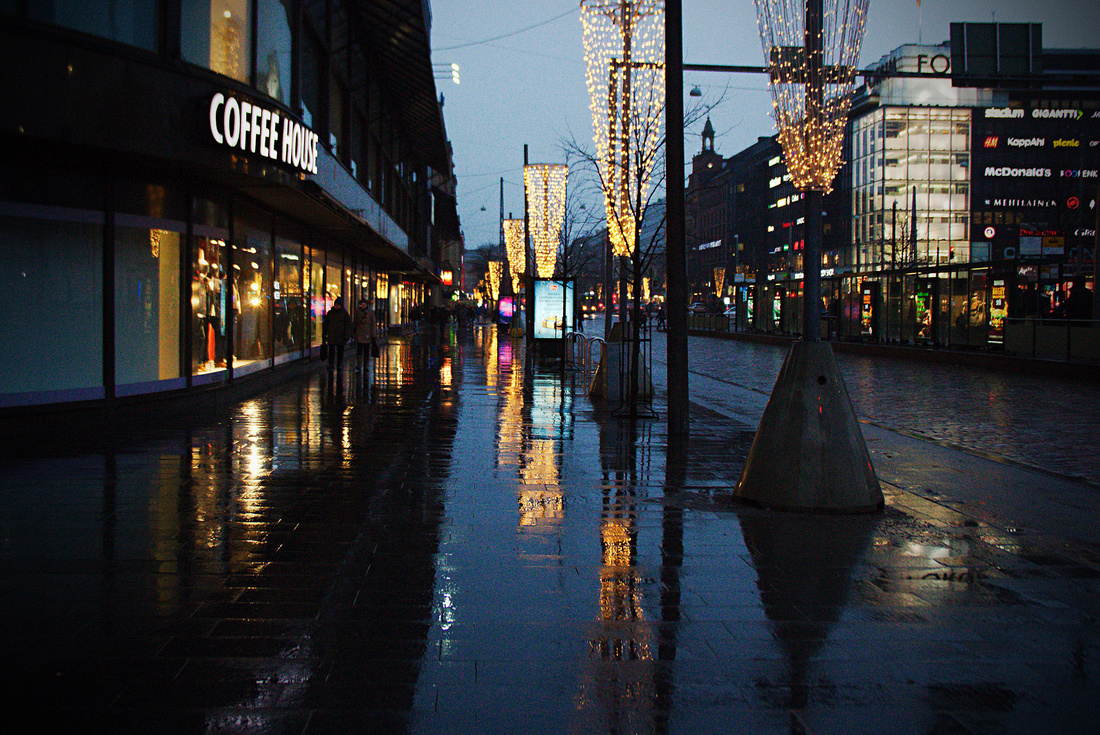 In a strange shop near the hotel, I saw a thing in the window that might have to come home with me. 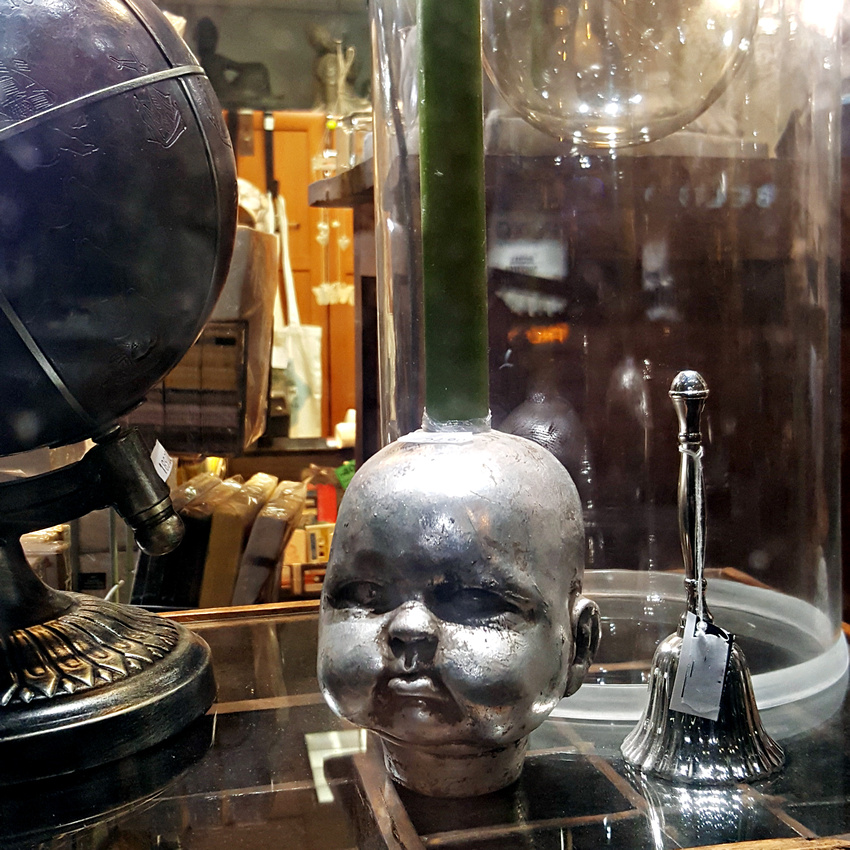 Tomorrow, I'm planning to check out a few more cathedrals, the market, and maybe even the modern art museum. As ever, thanks for looking; I love having you along with me.